How is the Apparel Industry Avoiding Slave-Harvested Cotton? 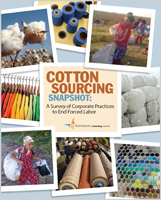 Cotton Sourcing Snapshot, a new report from As You Sow’s Responsible Sourcing Network (RSN), rates 49 apparel and home goods companies on their efforts to prevent cotton from Uzbekistan picked with forced adult and child labor from entering their supply chains.

The Government of Uzbekistan is notorious for forcing up to a million of its citizens to work in the cotton harvest each year. Due to mounting international pressure, the last two harvests have largely excluded children ages 6-15. However, the Uzbek government is now mobilizing even greater numbers of teens and adults.

Companies were assessed by answering a survey, which offered a maximum of 100 points across four categories. Only five companies scored over 50 points, including adidas, IKEA, and Patagonia. Nineteen scored under 25 points, and two companies, Urban Outfitters and All Saints, scored none at all.

While nearly 80% of companies have some sort of policy against Uzbek cotton, about the same amount do not audit their yarn spinners or textile mills, which can expose brands to risk. RSN is planning to address this risk in the coming year by launching the Spinner Verification Initiative.

The report offers several recommendations to help move companies toward greater certainty of cotton sourcing. These include participating in an industry-wide spinner verification program, integrating supplier compliance into IT systems, and increasing disclosure of internal practices.

Read more about RSN’s work on cotton from Uzbekistan at sourcingnetwork.org.