In the 1960s, when Gene Roddenberry created Star Trek, he envisioned a world in which diversity, tolerance, and empathy are celebrated. That is the world we believe in. That is the world we demand — for ourselves, for our families, for our nation — and that we work for, every day. We use shareholder power to hold corporations accountable, fighting for a better, cleaner, more equitable future for all of humanity and our planet. That commitment — our “prime directive” — takes on added urgency and intensity with the changes we now expect to see coming from our nation’s capital. In this 2016 wrap-up edition of Seeds of Change, we offer some of our proudest moments from the year, and highlight the special efforts of one of those who helped us make it so — our friends at The Roddenberry Foundation.

May we all live long and prosper,

Taking on Antibiotics in our Food

Antibiotics mismanagement, particularly at factory farms, is causing a rise of dangerous antibiotic-resistant bacteria in humans, raising the specter of a deadly post-antibiotic era. This past summer, we made great strides in our work with fast food companies to address antibiotics overuse and misuse in meat production. Wendy’s followed up on its commitment to us with its August announcement that its chicken would never be given medically-important antibiotics. We also announced a new shareholder resolution with Yum! Brands (KFC, Taco Bell, and Pizza Hut), which earned widespread media coverage. With so much progress on this serious public health issue in 2016 alone, we are encouraged about the potential that next year brings to create progress throughout the industry. 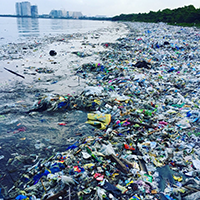 With the findings from a recent study projecting that oceans will contain more plastic than fish by 2050, our long-running Waste Program is taking on the critical issue of ocean plastics pollution. We believe polystyrene foam to be among the worst offenders, so we will be pressing McDonald’s to stop using polystyrene foam hot beverage cups globally — the company already quit using foam cups in its 14,000 U.S. restaurants in response to our pressure, accounting for a cool 770 million foam cups annually. We will also engage with retail shipping giants Amazon, Target, and Walmart to eliminate foam from their mail order packing materials, and press consumer brands like Kraft and Kroger to make more packaging recyclable, which diverts more material into recycling streams, not rivers and oceans, and boosts end markets for post-consumer stuff.  Engaging companies to shift their practices can have a major impact. After all, our oceans depend on it.

Since we launched Fossil Free Funds a little over a year ago, over 25,000 visitors to the site have executed 100,000 searches; socially responsible fossil free funds have nearly tripled, to 28; and assets under management by those funds have more than tripled, to $10 billion. Now we’ve upped the ante with a truly exciting new feature — carbon footprinting. We analyzed over $11 trillion of assets in global mutual funds so that, for the first time ever, investors can assess the overall carbon footprint of their mutual funds and ETFs. We’ve taken data once seen only by Wall Street executives and made it freely available to all. We believe that if you truly understand the carbon risk and exposure embedded in your portfolio, you will be even more inspired to align your investing with your values for a clean energy future. Look for even more advances in Fossil Free Funds next year.

Big Oil and the Need to Adapt or Perish

After years of ignoring climate change science, in October, ExxonMobil CEO Rex Tillerson finally admitted that climate change was both “real” and requires “serious action.” From our groundbreaking resolution calling on Exxon and Chevron to create a new path to cleaner, diversified energy sources by measuring their reserves in energy-neutral units rather than barrels of oil, to our deep-dive report Unconventional Risks: The Growing Uncertainty of Oil Investments, to our pressure on utilities to move away from coal, to our work improving transparency on fracking, in 2016 we turned up the heat in our push for a large-scale, sustainable transition in the energy economy. This transition is inevitable as fossil fuels’ business case deteriorates and the need for a just transition to a clean energy economy grows.

The 100 Most Overpaid CEOs Goes International

As we begin work on our third 100 Most Overpaid CEOs report with its expanded focus on how institutional funds vote on egregious pay packages, we are also pleased to be expanding the range of our research to include non-U.S. funds. The degree of transparency on how these large institutions vote on CEO pay packages covers a range as vast as the globe itself. Many funds publish their voting records in searchable databases, while others disclose this information in a more cumbersome, less accessible way. Learn more about our efforts to rein in excessive CEO pay on our blog.

Continuing the Quest for Transparency in Minerals and Cotton Sourcing

Conflict in the Eastern Democratic Republic of Congo (DRC) remains one of the most salient humanitarian crises in the world, and minerals mined in the region continue to be used to illegally fund armed groups. Our third annual Mining the Disclosures report, released in November, evaluates companies’ efforts to implement due diligence and promote conflict-free mining in the Democratic Republic of Congo.  In September, building off of learnings from the Conflict-Free Smelter Program, RSN launched its new initiative YESS: Yarn Ethically & Sustainably Sourced. Aimed to eradicate forced labor from the cotton, yarn, and textile industries, YESS will train and verify spinners on their due diligence efforts. Stay tuned for progress updates as this groundbreaking initiative is created and implemented!

“In the 1960’s, a time of civil and social uncertainty and unrest, Gene Roddenberry created Star Trek, offering a vision for a future where diversity and acceptance were encouraged and in which inclusivity and equality were the norm. After almost two decades of exploring my father’s life, I founded The Roddenberry Foundation in 2010 to help make that world a reality.

At the Foundation, we seek bold ideas that can change the world — ideas that focus on the core of systemic issues and lead to lasting and transformative change. We are committed to finding and supporting remarkable organizations that can disrupt existing dynamics, challenge old patterns of thought, and discover new ways to help us move towards a better future. That’s exactly what we found at As You Sow, a group making big changes at big corporations. As You Sow uses shareholder advocacy, their chosen strategy, with strength, precision, and unflagging dedication, insisting that corporations become part of the solution. We’ve been supporting As You Sow for four years now, and couldn’t be happier with this partnership and the results that they consistently deliver.”

The North Dakota Access Pipeline, intended to carry oil from the Bakken oil fields in North Dakota to a tank farm in Illinois, has become an important symbol of Indigenous people’s rights to protect their land and waters – and a lesson in the potential for corporate goals to translate into egregious human rights abuses. Despite the recent good news that the Army Corps of Engineers denied a permit for the construction of a key section of the Dakota Access Pipeline, the pipeline company intends to continue moving forward. We are actively working with a broad coalition of shareholders to address this issue now and for future projects. We’ve filed resolutions with companies that are partners in the pipeline and the banks that finance them. Our hope is that we can press these companies to assess their involvement in the conflict, gauge whether it matches their values with regard to Indigenous rights, and begin a dialogue toward a just and equitable solution, now and into the future. Stay tuned for updates in the new year.

Last month, we welcomed new Communications Associate Zoey Olbum to As You Sow. A graduate of the University of Puget Sound, an athlete, and a brand-new East Bay resident, Zoey joins our staff with a background in marketing, writing, and social media, as well as a passion for preserving nature. We are looking forward to all that she will bring to our small but mighty team.

Clean 200
In August, we released our inaugural Clean200™ list, jumpstarting a broad and dynamic dialogue about how investors can co-create a clean energy economy. The world took notice, as Clean200™ earned nearly 200 media hits from all over the world. Look for our quarterly updates beginning February 2017.