Welcome to our special fall edition of Seeds of Change. We are excited to give you a sneak peek into The Shareholder Action Guide, to be released on November 15 by Berrett Koehler Publishing. Hailed by Robert Reich as “a valuable call to action for small shareholders to change the ways big corporations do business,” this books empowers shareholders to demand positive, sustainable change in the world. It’s chock-full of stories about getting big corporations to make big changes. We hope you enjoy this preview and are inspired to order the book! 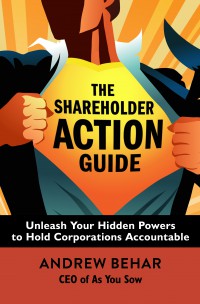 On May 2, 2007, Apple CEO Steve Jobs made a public statement on the Apple website, saying “Today is the first time we have openly discussed our plans to become a greener Apple. It will not be the last. We apologize for leaving you in the dark for so long.”

The Apple saga is a classic example of a heated negotiation with a notoriously tough corporation that led to positive change: it was the first time Apple publicly addressed the issues of electronics waste and hazardous materials. How did this change come about? Jobs’ reputation as a corporate leader who refused input from anyone – especially his shareholders – is famous. Yet, this announcement came shortly after shareholder resolutions on electronic waste were filed and he had a meeting with the lead proponents. What happened in that negotiation?

As You Sow’s work on e-waste began in 2003, led by Senior Vice President Conrad MacKerron, who formed a coalition of SRI allies including Calvert, Green Century, Pax, and Walden Asset Management to press major brands like Dell, Hewlett-Packard (HP), IBM, and Apple to set e-waste take-back goals. Dell, already under pressure from a grassroots campaign, committed to a take back goal in 2004. Later that year HP, which had an initial take-back program operating, accelerated its goal, pledging to recycle one billion pounds of e-waste by 2007.

But Apple, in the process of moving from innovative creator of the Mac to a global electronics powerhouse dominating the personal electronics market, was typically silent and not open to dialogue. MacKerron reached out to former Vice President Al Gore, who was on the Apple board. Several shareholder proposals were filed. Still, there was no progress. Finally, at the 2006 shareholder meeting, Executive Director Larry Fahn was able to engage Steve Jobs in a friendly discussion as the resolution was presented, and Jobs agreed to meet and see if progress could be made. The shareholder proposal asking Apple to improve its e-waste policies received a decent vote of 10 percent of shares voted.

The meeting with Jobs would not occur for almost another year. In February 2007 MacKerron, Fahn, and As You Sow board chair Thomas Van Dyck met with Jobs in his Cupertino office. True to form, Jobs offered brilliant insights but was also caustic, at times berating his visitors for overstepping their boundaries and railing against Greenpeace, which had launched a campaign for Apple to phase out toxins in its components, before acknowledging the recycling problem. The shareholder team held firm that an e-waste take-back policy was good for Apple and that competitors were way ahead. At one point, Jobs dismissively tossed a presentation the group’s staff had spent weeks preparing back across the table at them. It was time to improvise…

Like what you see? Read the rest of the story here, and pre-order your copy of “The Shareholder Action Guide” to get a free chapter TODAY. Amazon is offering a 15% discount for all pre-orders!

More from As You Sow

As You Sow does a LOT with a lean organization—will you help us? Your gift makes all the difference!

Look for our next edition of Seeds of Change in December.