The overuse and misuse of antibiotics in the meat industry is contributing to the rise of antibiotic-resistance in the U.S. and across the world. This serious public health issue is estimated to kill 10 million people a year worldwide by 2050. In the U.S., antibiotic-resistant infections cause over two million illnesses and 23,000 deaths each year, costing society between $55 billion to $70 billion each year.

The majority of antibiotics in the U.S. are given to animals that are not sick; they are mixed into animals’ food and water to make them grow bigger or to prevent illness in cramped and unhealthy environments. As You Sow engages companies to promote responsible antibiotics policies throughout their supply chain. We advise that companies phase out the routine use of antibiotics in livestock, especially in classes of drugs important for human health. We also advocate for strong animal welfare policies certified by third-party organizations, which can decrease illness rates in livestock and improve brand reputation.

This work is supported by Rachel’s Network. A community of women environmental funders, Rachel’s Network catalyzes the collective power of its members to influence social, political, and economic systems to advance a healthy, thriving world. Network members are deeply concerned about the growing threat of antibiotic resistance and believe that tackling the overuse of antibiotics in animal farming is an important step toward creating a more sustainable food system.

On September 13, 2017, As You Sow announced an open letter from groups worth $46 billion AUM, urging Sanderson Farms to revise its policies regarding antibiotic use.

As You Sow Signs Statement on Antimicrobial Resistance

On September 21, 2016, As You Sow partnered with other important voices to create a global investor statement on antimicrobial resistance. The co-developers of this statement include ICCR, FAIRR, and ShareAction. The statement received support from over 70 institutional investors and stakeholders with over $675 billion AUM.

In 2015, McDonald’s adopted a U.S. policy to source chicken that is raised without antibiotics important to human medicine, but did not create a similar policy for pork, beef, or chicken sourced outside the U.S. As You Sow has co-filed a resolution with lead-filer Benedictine Sisters of Boerne, Texas to request that McDonald’s extend its policy on antibiotics to their global supply chain for all livestock.

This 2016 resolution requests that McDonald’s only allow antibiotics to be used for disease treatment. Over 70 percent of antibiotics sold in the U.S. are used on food-producing animals so that they gain weight or to prevent illness rather than to treat illness. This type of misuse of antibiotics is contributing to a global health crisis, according to World Health Organization.

Antibiotic resistance occurs when an antibiotic loses its ability to effectively control or kill bacterial growth; in other words, the bacteria are “resistant” and continue to multiply in the presence of therapeutic levels of an antibiotic. Resistant microbes may require other medications or higher doses – often with more side effects, some of which may be life-threatening on their own. Some infections become completely untreatable due to resistance.

One of the main causes of antibiotic-resistant bacteria, sometimes referred to as superbugs, is the overuse and misuse of antibiotics in the meat industry. Antibiotic resistance is projected to kill 10 million people a year worldwide by 2050. In the U.S., these infections cause over two million illnesses and 23,000 deaths each year, costing society $55-70 billion.

This crisis is a global issue. The World Health Organization states that, “A post-antibiotic era – in which common infections and minor injuries can kill – far from being an apocalyptic fantasy, is instead a very real possibility for the 21st Century.”

In 2011, livestock consumed 80% of all antibiotics sold in the United States, and more than half of these antibiotics are considered important for human medicine. 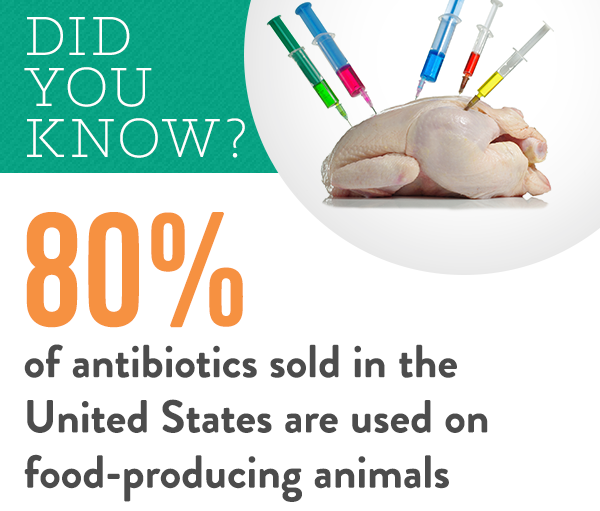 The U.S. Department of Agriculture has determined that much of the antibiotics use in animal feed provides little therapeutic benefit to the animals. Nevertheless, the Food and Drug Administration permits extensive use of antibiotics in animals, including the same or similar antibiotics as those used for the treatment of humans.

As You Sow engages companies to promote responsible antibiotics policies throughout the supply chain. For more information on this issue, visit the CDC’s Fact Sheet on Antibiotic Use in Food-Producing Animals.

×
Recoverable fatal error: Object of class stdClass could not be converted to string in /nfs/c10/h07/mnt/177546/domains/archive.asyousow.org/html/wp-content/plugins/pardot/includes/pardot-template-tags.php on line 94