Home » About Us » Theory of Change » Proxy Voting

The term proxy means “written authorization to act in place of another.” The proxy statement is the document used by companies seeking approval from shareholders of issues relating to corporate governance, recognizing that most shareholders will be voting remotely “by proxy” rather than in person at each company’s annual meeting.

Never voted your proxy before? Don’t worry, we have you covered: learn how to vote your shares.

“Vote Your Proxies with Jon Scott & Friends”, a step-by-step instructional video to voting your proxy ballot 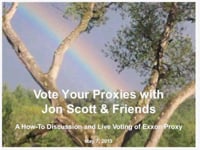 The annual meeting and proxy statement provide a formal communication channel between corporate management and shareholders. At a minimum, the proxy statement asks investors to ratify issues placed on the proxy by management, such as the election of directors, the auditor report and CEO pay. Management may also seek approval of more complex and controversial issues such as mergers and acquisitions, stock option plans, or resolutions brought by qualified shareholders on a variety of issues.

U.S. Securities and Exchange Commission (SEC) rules allow shareholders to file proposals with companies on corporate governance, social, and environmental issues. The requirements to file a proposal are relatively simple. Any shareholder who owns $2,000 worth of company stock and has held it for one year prior to the annual filing deadline may file a proposal. Proponents, or the shareholder(s) that file the resolution, are allowed only 500 words in the proxy statement to present their case. Management can take as much space as it would like to respond but there is no opportunity for proponents to respond in the proxy to correct misleading information in the company’s statement.

SEC rules also specify issues that may not be addressed through proposals. For instance, anything relating to personal grievances or that relates to operations that constitute less than 5% of revenue may be excluded. A company may challenge the proposal at the SEC if it thinks the proposal may be legally omitted. Many challenges relate to rules stating that issues pertaining to “ordinary business” may be excluded. But proponents can challenge the company’s logic and if the SEC sides with the shareholder proponents’ argument, the proposal must be placed on the company proxy statement and voted on at the annual meeting.

Proposals must receive a minimum number of votes to be allowed on the proxy the following year. Social proposals must obtain 3% of the total vote their first year to be resubmitted; 6% the second year and 10% its third year. If it fails to meet these minimum votes, it may not be resubmitted for 3 years.

If you hold mutual funds, you do not hold actual company shares and cannot vote proxies directly. However, you can contact the management of your mutual funds and ask them to vote in favor of issues you feel strongly about.

There are four categories of votes: For, Against, Abstain, and Not Voted (these votes are automatically voted by management). If an investor is unsure about an issue it is best to abstain as these votes are not cast either for, or against a vote and are not counted in the final tally.

Shareholders can vote their proxies via mail, internet, phone, or by attending the annual meeting in person. Voting instructions are provided on the proxy and votes can be changed as long as they meet the stated deadlines (usually 24 hours before the meeting). Those attending the annual meeting in person can change or submit their votes up to the very last minute. Those who do not vote their proxies in advance may have their ballot automatically cast by brokers or management.