Plastic ocean pollution, a component of marine litter, injures and kills marine life, spreads toxins, and poses a potential threat to human health.  The ocean already contains an estimated 150 million tons of plastic, with 8 million tons added annually—equivalent to a garbage truck load every minute. One recent study predicted oceans will contain more plastic than fish by 2050 if no actions are taken to reduce the flow of plastics into waterways.

Check out our Key Successes.
Learn More About the New Plastics Economy.

Only a fraction of plastic ocean pollution is visible. Most of it consists of tiny degraded particles swirling in vast gyres spread across 16 million square kilometers of ocean surface, an area the size of the United States and Australia combined. Plastic particles in oceans harm marine animals in two different ways.  First, they become lodged in the digestive systems of animals, leading to impairment or death. Fish, turtles, seabirds, sea lions, and whales can all die a grisly death eating or become entangled in plastic. A recent study found that a quarter of fish at markets in California and Indonesia contain plastic in their guts, mostly in the form of plastic microfibers.  Second, plastic particles can absorb toxins already in the water and spread them through the marine food web, and possibly to humans.  Much of plastic ocean pollution is packaging. Nine of the top 10 items recovered by the Ocean Conservancy’s annual coastal cleanup are some form of packaging or fast food dining supplies.

Designed to be Waste

Plastic packaging is increasingly designed for single use and the landfill—only 14% of plastic packaging is recycled; nearly a third doesn’t even make it to landfill and instead is littered on land or swept into the ocean.  The fastest growing form of plastic packaging—flexible packaging pouches and sachets—is now used for everything from dried fruit to pet food to detergent, and is not recyclable. Annual U.S. flexible plastic sales are estimated at $26 billion. A 2014 report by the UN Environment Programme estimated that use of plastic consumer goods causes $75 billion of environmental harm annually to natural ecosystems, including $13 billion specifically to marine ecosystems. After a single use, 95% of plastic packaging material value ends up in landfills, as roadside litter, or in the ocean. See our related video “Designed to be Waste.”

Citizens and policy makers have begun to respond. More than 60 California cities have banned polystyrene foam take out containers, and in December 2015, a federal law banned the use of plastic microbeads in personal care products. But much of the debris that ends up in the ocean due to poor recycling or trash collection programs, especially from public spaces like sidewalks and parks which often lack waste or recycling bins.

Brands that are placing plastic packaging on the market need to redesign it to be fully recyclable, and most importantly, take responsibility for dramatic improvements in actual recycling of packaging through producer responsibility programs so it stays out of waterways. Through shareholder engagement, we are challenging brands to do just that — increase recyclability of packaging, and find ways to dramatically increase the effectiveness and rates of recycling and composting.

After engagement with As You Sow about the lack of recyclability of its pouch packaging, Honest Tea has shifted some of its Honest Kids juice packaging away from multi-laminate pouches to aseptic containers. “The pouch offers some advantages in terms of its flexibility and its premium positioning,” Honest Tea cofounder and TeaEO Seth Goldman told As You Sow, “but there are disadvantages when it comes to recyclability.” By the end of 2016, an estimated 40% of total sales will have shifted to aseptic containers.

Our work already has resulted in important advances.  In 2013, following engagement with As You Sow, McDonald’s and Dunkin’ Brands agreed to phase out polystyrene foam coffee cups, which can cause havoc with marine life. In 2014 Procter & Gamble agreed to make 90% of its packaging recyclable, and Colgate-Palmolive pledged to make all packaging recyclable in three of four operating divisions and to use 50% recycled content, both by 2020.

In 2017, Target Corp. agreed to engage with its suppliers to phase out the use of harmful polystyrene foam for e-commerce packaging. Also, Unilever agreed to make 100% of its packaging recyclable, reusable, or compostable by 2025.

To ensure the health of our oceans, many more companies need to commit to stop using harmful or toxic plastics, to design their packaging for recyclability and to commit to develop a greatly optimized recycling system, with public space recycling to prevent littered packaging from being swept into storm drains, streams, and then oceans.

KraftHeinz, Kroger, and Mondelez International are three major brands we are engaging on recyclable packaging and plastic ocean pollution. Shareholder proposals filed with the companies on this topic have received strong support. In 2017, our proposal to McDonald’s Corp., asking it to phase out use of polystyrene foam packaging globally, received the support nearly one-third of all shares voted. A 2015 proposal to Kraft was supported by nearly 30% of shares voted, and 2016 proposals at Kroger were supported by 28% and at Mondelez by nearly 27% of shares voted. These are very high vote results — the average vote result for all social and environmental proposals in 2015 was 20%. 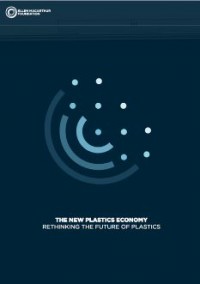 A blueprint for a New Plastics Economy was drawn in a recent report from the Ellen MacArthur Foundation and supported by Ikea, Kimberly-Clark and Unilever, among others. It builds on and aligns with the principles of the Circular Economy, an industrial system that is restorative and regenerative by design. The New Plastics Economy has three main components:

As You Sow is pleased that the report affirms that a radical increase in the “economics, quality and uptake of recycling” is an essential first step towards a New Plastics Economy, confirming our pioneering, long-term focus on engaging companies to increase recycling of post-consumer products and packaging.

×
Recoverable fatal error: Object of class stdClass could not be converted to string in /nfs/c10/h15/mnt/177546/domains/archive.asyousow.org/html/wp-content/plugins/pardot/includes/pardot-template-tags.php on line 97