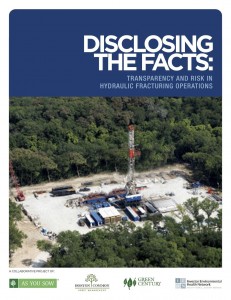 The hydraulic fracturing industry lacks transparency when it comes to environmental and community safety, according to As You Sow’s new scorecard report.

The report, Disclosing the Facts: Transparency and Risk in Hydraulic Fracturing Operations, grades 24 companies on their disclosure of environmental and community impacts, as well as their practices to mitigate those impacts. Every company surveyed failed investor expectations, with 10 of the 24 companies, including industry giants like Chevron, BP, and Exxon Mobil, providing disclosure in fewer than three of 32 issues.

“The oil and gas industry’s hydraulic fracturing operations are under intense scrutiny for potential harm to neighboring communities and the environment – from air and water pollution to increased noise, traffic, and crime,” said Danielle Fugere, President of As You Sow. “If companies are not tracking these potential problems, it is difficult to demonstrate to investors, regulators, or the public that the problems are being avoided or resolved.”

The dramatic growth in the extraction of oil and gas from shale formations using horizontal drilling and fracking has been highly controversial. The practice can cause toxic chemical leaks and spills, has the potential to contaminate drinking water, releases air pollution, and brings truck traffic and increased crime to communities in which operations are occurring. These social and environmental concerns have prompted bans and moratoria on fracking in numerous U.S. communities.

Companies were graded on their disclosure on 32 indicators across five issue areas: management of toxic chemicals; water and waste; air emissions; community impacts; and governance. The highest scoring company, Encana, provided sufficient disclosures on less than half of these indicators. The lowest scoring company, QEP Resources, scored only a single point.

Reporting areas that garnered low scores included community concerns and their resolution, methane emissions, total water use, and water sources, with almost no companies offering meaningful disclosure on those issues. Earlier this year, our shareholder resolution with Exxon Mobil seeking similar disclosures received over 30% support, indicating a strong investor demand for this information.

Learn more about As You Sow’s Fracking initiative, or visit DisclosingTheFacts.org to read the report.