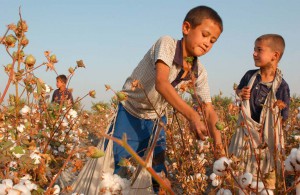 In Uzbekistan, children and adults alike are forced to work in the fields.

As Uzbekistan’s annual cotton fair wrapped up, a mounting number of international apparel brands and retailers declared their refusal to source cotton from the country until the forced labor of children and adults is eliminated. Representing over $1 trillion USD in market cap, 139 brands and companies have now signed the “Company Pledge Against Forced Child and Adult Labor in Uzbek Cotton.”

Ikea, lululemon, Marks & Spencer, and Joe Fresh are among the most recent companies to join the pledge. As a project of As You Sow, Responsible Sourcing Network is dedicated to bringing together investors, companies, and human rights activists to create sustainable supply chains, and has been collecting signatories for the pledge since 2011.

“We welcome these brands to the growing coalition of apparel companies taking a stand against oppression and forced labor in the Uzbek cotton industry”, said Patricia Jurewicz, Director of Responsible Sourcing Network. “Signing this common pledge demonstrates solidarity by the industry to block cotton using any form of slave labor from entering the global market.”

Although the Government of Uzbekistan for the first time is allowing the International Labor Organization (ILO) to conduct an inspection mission during the 2013 cotton harvest, ILO representatives are being accompanied by Uzbek officials, making it difficult for citizens to speak openly. Tragically, despite of the inspectors, the death of six-year-old Amirbek Rachmatow on September 15th was one of eight fatalities in the first two months of the harvest. Continued forced mobilization of children and adults has been well documented this year.

In addition, Responsible Sourcing Network is currently working on a Company Ranking, due out early next year, which will analyze companies’ efforts to keep cotton tainted with slave labor out of their supply chains.