New Focus on Antibiotics and Pesticides in Food 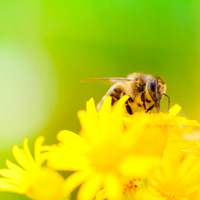 One of our new Environmental Health initiatives aims to protect bees and other pollinators.

The overuse of pesticides and antibiotics in food production can lead to serious consequences. Now, new initiatives at As You Sow are taking steps to make sure companies hear consumer concerns.

The Bee and Pollinator Protection initiative is working with companies to safeguard these critical insect populations. Pollinators are necessary for fruits, vegetables, and most the food we eat – without them, the agricultural industry would collapse. Unfortunately, misguided applications of pesticides commonly known as neonicotinoids or “neonics” are contributing to what has been called “hive collapse” and the rapid decline of bee colonies, with potentially devastating effects to agriculture.

After engagement with As You Sow, Trillium Asset Management, and Clean Yield Asset Management, General Mills became the first major packaged foods company to pledge to protect pollinators from the harmful impacts of pesticides. “Many of the crops that General Mills buys depend on pollinators. By investing in supply-chain sustainability, the company is ensuring the future of its supply chain and its profitability,” said Austin Wilson, Environmental Health Program Manager.

There is also a growing public health crisis stemming from the misuse of antibiotics, leading us to form the Antibiotics and Factory Farms initiative. The overwhelming majority of antibiotics sold in the U.S. are used on livestock, and it’s causing a rise in “superbugs,” or antibiotic-resistant bacteria. In the U.S., antibiotic-resistant infections cause over 2,000,000 illnesses and 23,000 deaths each year, costing society between $55 billion to $70 billion each year. As You Sow is now engaging with Hormel, producer of Spam, Stagg Chili, and Jennie-O turkey, to address these critical issues.

Visit www.asyousow.org/e-health to learn more about how we are working to create a more just and sustainable food system.