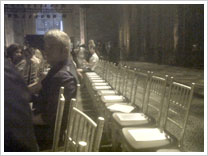 This fall, the Responsible Sourcing Network (a project of As You Sow) attended New York Fashion Week to make sure cotton produced with child labor in Uzbekistan stayed off the runways. RSN’s pledge against forced child labor in Uzbekistan received public support from over 60 of the world’s largest apparel manufacturers, brands, retailers, and an apparel and footwear associations including Gucci, H&M, and Walmart.

Displaying a historic level of industry activity on this issue, signatories pledged“firm opposition to the use of forced child labor in the harvest of Uzbek cotton. We commit to not knowingly source Uzbek cotton for the manufacturing of any of our products until the Government of Uzbekistan ends the practice of forced child labor in its cotton sector.”

Starting with an article in Women’s Wear Daily, the company pledge and its signatories were mentioned by prominent outlets covering the event. It was also noted in a debate on corporate governance and accountability in the House of Lords, the Upper House of the Parliament of the United Kingdom.

The pledge gave legitimacy to the protests around the “Guli” fashion show of Gulnara Karimova, daughter of the President of Uzbekistan, whose show was eventually cancelled by Fashion Week organizers thanks to pressure by human rights activists. The canceled show propelled coverage in national and international media outlets, society pages, and even gossip columns. Overall, coverage reached diverse and impressive readership in the United States and overseas giving the campaign against ongoing forced child labor in Uzbekistan a new life beyond Fashion Week.

Looking ahead, RSN will be working with a coalition of 80+ apparel brands to implement cotton traceability systems throughout their supply chains, in addition to developing media outreach and an educational campaign for 2012.