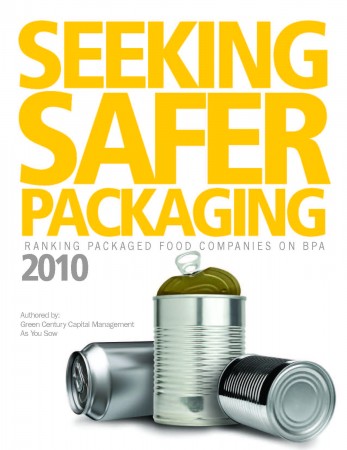 Nearly every canned food and beverage product on the market today contains a highly controversial chemical, bisphenol A (BPA), in its lining. BPA has been linked to serious diseases and has been the focus of increasing consumer concern and regulatory restrictions. As investors, As You Sow and Green Century Capital Management (Green Century) believe companies may face financial risks from the presence of BPA in product packaging and should act quickly to eliminate the chemical to help protect shareholder value and preserve company reputations.

This report by Green Century and As You Sow builds on the first edition of Seeking Safer Packaging, published in April 2009, which ranked food and beverage companies on their efforts to address BPA in their product packaging. In this edition, the number of companies analyzed has expanded to include major U.S. retail companies that sell private-label canned products. The scoring and analysis for this report is based on a survey distributed to companies (see Appendix A & B).

Since the first publication of Seeking Safer Packaging in spring 2009, momentum to reduce exposure to BPA has increased. New scientific and investigative reports on the potential health impacts have been published, more states and localities are adopting restrictions, and consumer concern is rising. This report analyzes how companies are responding to this critical issue by disclosing information, exploring substitutes and committing to phase out BPA, and demonstrates that a growing number of companies are proactively mitigating BPA-related risks by testing and implementing substitute packaging.

Given rising consumer and regulatory concerns, Green Century and As You Sow recommend that all companies make significant investments in phasing out BPA from products and take aggressive action to remove it where feasible and safe substitutes exist. Companies should also increase transparency on how they are responding to consumer concerns and possible risks to shareholder value associated with the chemical. Innovative companies that are spearheading the transition to BPA-free packaging for canned goods are sending a clear message to investors that they are looking to stay ahead of the market and gain an edge over competitors.