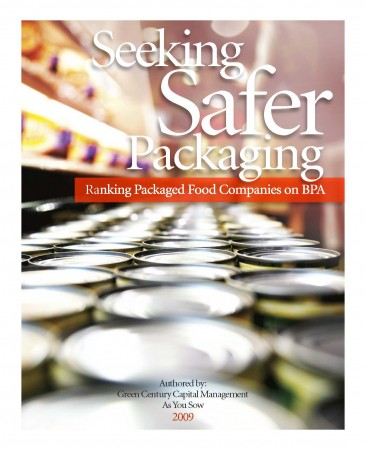 Seeking Safer Packaging, published in April 2009, ranks food and beverage companies on their efforts to address BPA in their product packaging. Consumers, the media, and public officials alike are becoming increasingly concerned about bisphenol A (BPA), an endocrine-disrupting chemical used in hard clear plastic and can linings.

Seeking Safer Packaging is a project of Green Century Capital Management, Inc. (Green Century) and As You Sow. The authors sent letters to 20 companies in the packaged food industry to identify the actions the companies are taking to address concerns regarding BPA. Fourteen companies replied. Company scores are based entirely on their responses to these letters.

The scorecard is accompanied by an introduction to health concerns linked to BPA exposure, the changing regulatory climate related to BPA, and studies of companies that have voluntarily removed the chemical from their products.

Our main findings include:

Green Century and As You Sow recommend that each of the companies featured in this scorecard switch to BPA-free technologies in every product line for which they are available and actively pursue a broader range of alternatives so as to protect public health and reduce their exposure to risks associated with BPA.