Home » About Us » Our Impact » Electronic Waste and Best Buy

Electronic waste is a pressing issue in waste management. An estimated 41 million computers, 31 million monitors, and 130 million cell phones are thrown away in the U.S. annually, but only 13% of it is recycled. The other 87% goes to landfills or incinerators causing toxic pollution to the air, land, and water.

In 2007, As You Sow asked Best Buy, the #1 U.S. electronics retailer, to create an in-store electronics take-back program. After a successful pilot in 2008, As You Sow helped Best Buy fully implemented the program across their over 1,000 US stores. 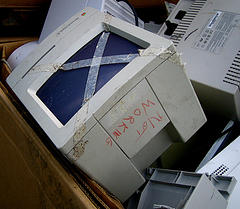 The successful program has been a win-win for consumers who now have a convenient place to dispose of all of their electronics responsibly and Best Buy, who has improved their reputation and adopted the “e-cycle” branding in its advertising.