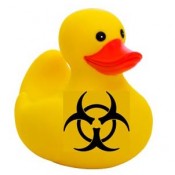 During 2007 consumers saw an unprecedented number of major recalls by Mattel, Inc. and other companies for toys tainted with lead or other hazardous chemicals. As You Sow contacted more than one dozen toy companies and major corporate media licensors about the use of phthalates, lead, PVC and other product safety issues associated with children’s toys and products.

We asked toy companies to share whether they had introduced new ways to avoid situations similar to the Mattel, Inc. recall, through enhanced testing of products on shelves and during the production phase, as well as through occupational exposure testing, and the phase-out of PVC from toys and children’s products.

Hasbro is the world’s second largest toymaker featuring iconic board games like Monopoly and Scrabble well as scores of toys based on licensed characters from Darth Vader to GI Joe and Dora the Explorer.

After a 2007 shareholder resolution asking for a sustainability report received a 44% vote, the company and shareholders including As You Sow began a dialogue on product and worker safety issues focusing on both occupational exposure to harmful substances by workers making toys and consumers (i.e. children) who use them. Hasbro’s products have not been the focus of any lead paint recalls. The company outsources most of its toy production and uses an auditing system developed by the International Council of Toy Industries (ICTI) for monitoring worker safety in its global supply chain. ICTI certifies commercial auditors to perform social compliance audits at supplier factories, and suppliers found to be out of compliance are required to complete corrective action plans. However, the process is largely opaque with little public reporting on problems found and progress made to correct them. Hasbro’s biggest competitor, Mattel, posts summaries of many supplier audits on its web site.

Our investor group has had two meetings with Hasbro and urged the company to develop a public report summarizing compliance progress, Further, we have asked them to focus on whether the ICTI audits follow required procedures to perform air quality monitoring in factories to assure that workers are not expose to high levels of workplace toxics.

GE’s subsidiary NBC Universal produces children’s toys that are sold at its Universal Studios theme parks. To date, none of its products have been the subject of recalls.

In early 2008, As You Sow and five social investment colleagues met with senior sourcing executives of GE – owner of NBC and Universal films (NBCU). At these meetings, GE provided an overview to shareholders of its supplier auditing program with specific focus on product safety, supply chain compliance, and worker environmental health and safety protection policies. The company provided data on suppliers audited in manufacturing operations in 40 countries, problems found, and corrective actions taken. GE did several thousand audits of suppliers between 2002 and 2007 and says it works with suppliers to resolve a wide range of violations.

It provided more individualized results for consumer goods produced by its NBCU licensing unit which includes children’s toys sold at its Universal Studios theme parks. In recognition of the lead toy recalls last summer, it is increasing its testing protocols, especially for products marketed to children.

NewsCorp’s Fox licensing unit is responsible for sourcing consumer goods related to characters from animated Fox movies and TV shows like The Simpsons.

After As You Sow filed shareholder proposals with TimeWarner in 2006 and 2007, the company agreed to develop a vendor standards compliance policy for the entire company, including Warner Bros. Consumer Products. We have had periodic meetings with the company to monitor its progress in developing and implementing these policies. We expect it will place a special emphasis on occupational safety and workplace issues as part of these new policies.