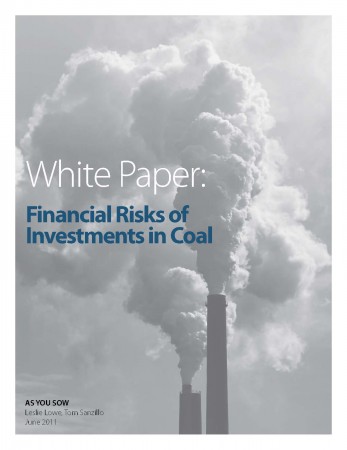 In June 2011, As You Sow released White Paper: Financial Risks of Investments in Coal laying out the financial risks of continued reliance on coal for electricity generation.

The White Paper demonstrates that these risks combine to make current and future investments in coal-dependent utilities and coal mining companies exceedingly precarious.

As You Sow has released an Update to the 2011 White Paper that provides a snapshot of the current trends underlying the financial risks for investments in coal. Access the Update here.

As You Sow has identified three primary risks for investors who have utility and mining companies in their portfolios:

The clearest signal that the utility industry acknowledges these risks is the cancellation by public utility commissions and utilities of 153 new coal plants.i The plant cancellations amounted to $243 billion in investment decisions being reversed, or disinvested, from coal in the past four years.ii In 2010, a growing list of utility announcements carrying the message of existing coal plant closures and plans for new natural gas plants and alternative energy projects continued the trend.

i Sierra Club, “Stopping the Coal Rush,” accessed 6 May 2011, available at: www.sierraclub.org/environmentallaw/coal/plantlist.aspx.