The 100 Most Overpaid CEOs 2017: Are Fund Managers Asleep at the Wheel?

CEO pay grew an astounding 943% over 35 years, from 1978-2015, vastly outpacing growth in the cost of living, the productivity of the economy, and the stock market.

The third report in the series, The 100 Most Overpaid CEOs: Are Fund Managers Asleep at the Wheel? highlights the forces behind disproportionate pay and the fund managers who continue to approve these pay packages. 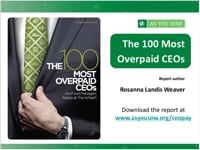 According to the Economic Policy Institute, “CEO pay grew an astounding 943% over the past 37 years, greatly outpacing the
growth in the cost of living, the productivity of the economy, and the stock market, disproving the claim that the growth in CEO pay reflects the ‘performance’ of the company, the value of its stock, or the ability of the CEO to do anything but disproportionately raise the amount of his pay.”

For the past two years we have highlighted the 100 most overpaid CEOs of S&P 500 companies, and the votes of large shareholders, including mutual funds and pension funds on their pay packages.

What has changed since the first report? Not much. Executive pay has continued to increase. Although mutual funds and pension funds are doing better at exercising their fiduciary responsibility by more frequently voting their proxies against some of the most outrageous CEO pay packages. Of the mutual funds with the largest changes in voting habits from last year, all of them opposed more of the pay packages than they had the prior year.

As we noted in our prior reports, the system in place to govern corporations has failed in the area of executive compensation. Like all the best governance systems, corporate governance relies on a balance of power. That system envisions directors representing shareholders and guarding the company’s assets from waste. It also envisions shareholders holding companies and executives accountable.

This governance system comes from a time when it was assumed that unhappy investors would simply sell their stakes if sufficiently dissatisfied with the governance of a company. It reflects a time when there were fewer intermediaries between beneficial holders and corporate executives. However, today more and more investors own shares through mutual funds, often investing in S&P 500 index funds. Individual investors are not in a position to sell their stakes in a specific company. The funds themselves are subject to a number of conflicts of interest and to what economists refer to with the oxymoronic-sounding term “rational apathy,” to reflect the expense of oversight in comparison to a pro rata share of any benefits.

The pay packages analyzed in this report belong to the CEOs of companies that the majority of retirement funds are invested in.

Today, those casting the votes on the behalf of shareholders frequently do not represent the shareholders’ interests.

CEO compensation as it is currently structured does not work; rather than incentivize sustainable company growth, compensation plans increase disproportionately by every measure. Too often CEOs are rewarded for mergers and acquisitions instead of improving company performance. As noted in the Financial Crisis Inquiry Report, “Those [compensation] systems encouraged the big bet – where the payoff on the upside could be huge and the downside [for the individual executive] limited. This was the case up and down the line – from the corporate boardroom to the mortgage broker on the street.”2 We note that the downside, which could include such features as environmental costs, may be limited for the individual, and instead borne by the larger society.

Paying one individual EXCESSIVE amounts of money can lead people to make the false assumption that such compensation is justified and earned. It undermines essential premises of capitalism: the robust ‘invisible hand’ of the market as well as the confidence of those who entrust capital to third parties. Confusing disclosure coupled with inappropriate comparisons are then used to justify similar packages elsewhere. These systems perpetuate and exaggerate the destabilizing effects of income inequality, and may contribute to the stagnating pay of frontline employees.

As the report is now in its third year, we have the ability to look back and see what happened to the companies identified in our report two years ago. We’ve been saying the most overpaid CEOs under-deliver for shareholders. In examining this data from the following two years of our report, we have found dramatic results— not only does the group of 100 most overpaid CEO companies of the S&P 500 underperform the S&P 500 by 2.9 percentage points, but the firms with the 10 most overpaid CEOs underperformed the S&P 500 index by an amazing 10.5 percentage points and actually had a negative return, reducing the actual value of the companies’ shares by 5.7 percent. In summary, the firms with the most overpaid CEO’s devastated shareholder value since our first report published in February 2015.

Identifying the 100 most overpaid CEOs in the S&P 500 was our purpose in writing this report. In undertaking this project we focused not just on absolute dollars, but also on the practices we believe to have contributed to bloated compensation packages.

Shareholders now supposedly have the right, since the enactment of the Dodd-Frank financial reform act, to cast an advisory vote on compensation packages. However, in today’s world, most shareholders have their shares held and voted by a financial intermediary. This means that this critical responsibility is in the hands of a fiduciary at a mutual fund, an ETF, a pension fund, a financial manager, or people whose full time job is to analyze the activities of the companies they invest in and monitor the performance of their boards, their CEOs, and their compensation.

A key element of the report has been to analyze how mutual funds and pension funds voted on these pay packages. This year we vastly expanded the list of funds we looked at. In response to excessive and problematic CEO pay packages, it should be noted that every fund manager has the power to vote against these compensation plans and withhold votes for the members of the board’s compensation committee who created and approved them. In some cases, institutional investors should request meetings with members of the compensation committees to express their concerns. Institutional investors should be prepared to explain their votes on executive pay to their customers, and individuals should hold their mutual funds accountable for such decisions by expressing their displeasure directly to those that are also well compensated to protect and represent them.

Finally, again this year we looked at the directors who serve on the compensation committees of these boards. 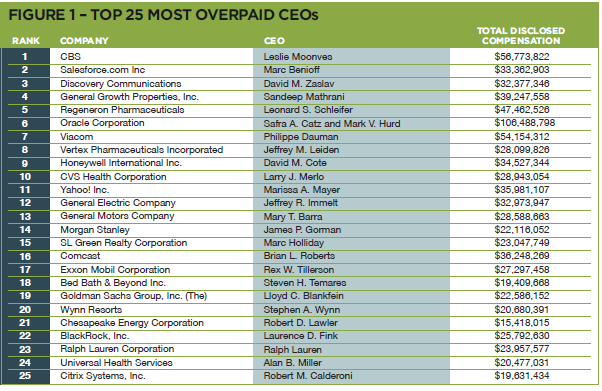 Of the top 25 most overpaid CEOs, 15 made the list for the second year in a row, and 10 have been on the list for the third time. These rankings are based on a statistical analysis of company financial performance with a regression to identify predicted pay, as well as an innovative index developed by As You Sow that considers more than 30 additional factors.

The companies we listed in first report on overpaid CEOs has markedly underperformed the S&P 500 since that time. The 10 companies we identified as the most overpaid firms as a group underperformed the S&P 500 index by a gaping 10.5% and actually demolished shareholder value as a group with –5.7% financial returns. In summary, the most overpaid CEO firms destroyed shareholder value since our first report.

Many of the overpaid CEOs are insulated from shareholder votes, suggesting that shareholder scrutiny can be an important deterrent to outrageous pay packages. A number of the most overpaid CEOs are at companies with unequal voting structures and/or triennial votes, so shareholders did not have the opportunity to vote this year on the extraordinary packages. While the Say-on-Pay law allows less frequent votes, and shareholders can decide if they prefer to vote every one, two, or three years, the vast majority of companies hold annual votes on pay. We believe that the fact that our list of the top 25 overpaid CEOs includes several companies that do not hold annual votes on pay implies that such insulated companies are more willing to flaunt best practices on pay and performance.

The most overpaid CEOs represent an extraordinary misallocation of assets. Regression analysis showed 14 companies whose CEOs received compensation at least $20 million more 2015 than they would have garnered if their pay had been aligned with performance.

Shareholder votes on pay are wide-ranging and inconsistent, with pension funds engaging in more quantitative analysis.  This report, representing the broadest survey of institutional voting ever done on the topic, shows that pension funds are more likely to vote against overpaid packages than mutual funds. Using various state disclosure laws, we were able to collect data from over 30 pension funds. The data shows some pension funds approving just 18% of these overpaid CEO pay packages, to others approving as many as 93% of them.

Mutual funds, on the other hand, are far more likely approve of these overpaid CEO pay packages even though among mutual funds there is wide variation. Of the mutual funds with the largest changes in voting habits from last year, all of them opposed more of the pay packages than they had the prior year. In addition to the trending votes, several funds have indicated that, at a minimum, they will be reviewing pay more closely. Of the largest mutual funds, Dimensional Fund Advisors opposed 53% of these packages, while Blackrock opposed only 7% of them. Some funds seem to routinely rubber stamp management pay practices, enabling the worst offenders and failing in their fiduciary duty. TIAA-CREF, the leading retirement provider for teachers and college professors, is more likely to approve high-pay packages than almost any other institution of its size with support level of 90%.

A primary goal of the report is to focus on mutual fund voting data. This data is disclosed on an annual basis according to a proxy season that covers shareholder meetings held from July 1 of the previous year to June 30 of the present year. 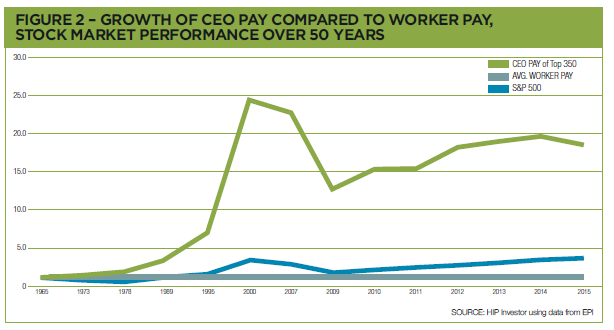