CEO pay grew an astounding 997% the past 36 years, vastly outpacing growth in the cost of living, the productivity of the economy, and the stock market.

The second report in the series, The 100 Most Overpaid CEOs: Are Fund Managers Asleep at the Wheel? highlights the forces behind disproportionate pay and the fund managers who continue to approve these pay packages. 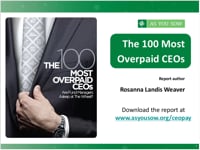 Last year we highlighted the 100 most overpaid CEOs of S&P 500 companies, and the votes of large shareholders, including mutual funds and pension funds, on their pay packages.

What has changed since that report? Already excessive pay increased, but prospects for improved disclosure and greater oversight have increased somewhat as well. In the last year, pay for S&P 500 CEOs has risen (by some estimates up to 15.6%), yet the value of the shares of these companies actually declined slightly- despite massive expenditures of corporate funds on stock buybacks designed to increase the value of those shares. After five years of delay the SEC finally adopted rules that will allow shareholders to better understand the gap between the pay of the CEO and other employees of the corporation. The SEC is also moving forward on rules that will help expose the gap between the pay of the CEO and the performance of the companies’ shares in the stock market. Furthermore, some mutual funds and pension funds began to better exercise their fiduciary responsibility by more frequently voting down some of the most outrageous CEO pay packages.

As we noted in our prior report, the system in place to govern corporations has failed in the area of executive compensation. Like all the best governance systems, corporate governance relies on a balance of powers. That system envisions directors representing shareholders and guarding the company’s assets from waste. It also envisions shareholders holding companies and executives accountable.

This governance system comes from a time when it was assumed that unhappy investors would simply sell their stakes if sufficiently dissatisfied with the governance of a company. It reflects a time when there were fewer intermediaries between beneficial holders and corporate executives. However, today more and more investors own shares through mutual funds, often investing in S&P 500 index funds. Individual investors are not in a position to sell their stakes in a company. The funds themselves are subject to a number of well-documented conflicts of interest and to what economists refer to with the oxymoronic-sounding term “rational apathy,” to reflect the expense of oversight in comparison to a pro rata share of any benefits.

The pay packages analyzed in this report belong to the CEOs of companies that the majority of retirement funds are invested in.

The pay packages analyzed in this report belong to the CEOs of companies that the majority of retirement funds are invested in. Today, those casting the votes on the behalf of shareholders frequently do not represent the shareholders’ interests.

CEO compensation as it is currently structured does not work: rather than incentivize sustainable growth it increases disproportionately by every measure, and receives no consequences. Too often it rewards deals above development and risk rather than return on invested capital (ROIC). As noted in the Financial Crisis Inquiry Report, “Those [compensation] systems encouraged the big bet – where the payoff on the upside could be huge and the downside limited. This was the case up and down the line – from the corporate boardroom to the mortgage broker on the street.”2 We note that the downside, which could include such features as environmental costs, may be limited for the individual, and instead borne by the larger society.

Paying one individual with excessive wealth unrelated to incentives or results creates a false narrative that such compensation is justified and earned. It undermines essential premises of capitalism: the robust ‘invisible hand’ of the market as well as the confidence of those who entrust capital to third parties. Confusing disclosure coupled with inappropriate comparisons are then used to justify similar packages elsewhere. These systems perpetuate and exaggerate the destabilizing effects of income inequality, and may contribute to the stagnating pay of frontline employees.

The task we set before ourselves in writing this report was to identify the 100 most overpaid CEOs in the S&P 500. In undertaking this project we focused not just on absolute dollars but also on those practices we believe to have contributed to bloated compensation packages.

Shareholders now supposedly have the right, since the enactment of Dodd-Frank, to cast an advisory vote on compensation packages. However, in today’s world, most shareholders have their shares held and voted by a financial intermediary (i.e., a mutual fund, an ETF, a pension fund, a financial manager, or people whose full-time job is to watch the companies they invest in and monitor the performance of their boards, their CEOs, and their compensation).

A key element of the report has been to analyze how mutual funds and pension funds voted on these pay packages. This year we vastly expanded the list of funds we looked at. In response to excessive and problematic CEO pay packages, everyone has the power to vote against these plans and withhold votes for the members of the board’s compensation committee who created and approved these bloated plans. In some cases, institutional investors should request meetings with members of the compensation committees to express their concerns. Institutional investors should be prepared to explain their votes on pay to their customers, and individuals should hold their mutual funds accountable for such decisions.

Finally, again this year we looked at the directors who serve on the compensation committees of these boards.

Of the top 25 most overpaid CEOs, 11 made the list for the second year in a row. These rankings are based on a statistical analysis of company financial performance with a regression to identify predicted pay, as well as an innovative index developed by As You Sow that considers over 30 additional factors.

Many of the overpaid CEOs are insulated from shareholder votes, suggesting that shareholder scrutiny can be an important deterrent to outrageous pay packages. A number of the most overpaid CEOs are at companies with unequal voting structures and/or triennial votes, so shareholders did not have the opportunity to vote this year on the extraordinary packages. While the say-on-pay law allows less frequent votes, shareholders have not supported the practice and the vast majority of companies hold annual votes on pay. We believe that the fact that our list of the top 25 overpaid CEOs includes several companies that do not hold annual votes on pay implies that such insulated companies are more willing to flaunt best practices on pay and performance.

The most overpaid CEOs represent an extraordinary misallocation of assets. Regression analysis showed 17 CEOs with compensation at least $20 million more in 2014 than they would have garnered if their pay had been aligned with performance.

Shareholder votes on pay are wide-ranging and inconsistent, with pension funds engaging in more rigorous analysis. This report, representing the broadest survey of institutional voting ever done on the topic, shows that pension funds are more likely to vote against overpaid packages than mutual funds. Using various state disclosure laws, we were able to collect data from over 30 pension funds. The data shows support for overpaid CEOs ranging from approval of 24% – indicating voting practices based on rigorous compensation analysis – to 79%.

Mutual funds are far more likely to rubber stamp than pension funds, but among mutual funds there is wide variation. Of the largest mutual funds, American and Schwab approved 65% of these packages, while Blackrock supported 97% of them. Some funds seem to routinely rubber stamp management pay practices, enabling the worst offenders and failing in their fiduciary duty. TIAA-CREF, the leading retirement provider for teachers and college professors, is more likely to approve high-pay packages than almost any other institution of its size with support level of 97%.