CEO pay has grown nearly 1,000% over the past four decades, far exceeding growth in median worker pay or company share prices. Our new report, The 100 Most Overpaid CEOs: Executive Compensation at S&P 500 Companies, highlights the 100 most overpaid CEOs and examines the forces behind the trend of ever-increasing CEO pay.

The Top 100 Most Overpaid CEOs: Are Fund Managers Asleep at the Wheel?

CEO pay grew an astounding 997% the past 36 years, vastly outpacing growth in the cost of living, the productivity of the economy, and the stock market.

The second report in the series, The 100 Most Overpaid CEOs: Are Fund Managers Asleep at the Wheel? highlights the forces behind disproportionate pay and the fund managers who continue to approve these pay packages.

Discover which mutual funds and pension funds are most likely to vote in approval of excessive executive compensation in this 2016 edition of The Top 100 Most Overpaid CEOs.

With the 2016 proxy season quickly approaching, our CEO Pay blog will offer updates on the pay of some of the companies featured in our upcoming report, The 100 Most Overpaid CEOs 2016.

Skyrocketing CEO pay packages represent a misallocation of assets that is detrimental to investors, and a driver of wider social inequality. Using a methodology that combines statistical analysis and an in-depth examination of over 30 ‘red flag’ indicators, the report found widespread consensus on the worst actors, companies with huge pay packages that showed relatively weak shareholder returns.

The report also examines the voting records of mutual funds on executive compensation packages, identifying those that are uncritically rubber-stamping the recommendations of the compensation committees. This is an issue that affects everyone – the pay packages analyzed in this report are from the companies that the majority of retirement funds are invested in. If someone has a 401(k) through their employer, it’s likely they are invested in a company with an overpaid CEO.

Most CEOs have come to be grossly overpaid, and that overpayment is harmful to the companies, the shareholders, the customers, the other employees, the economy, and society as a whole.

In addition, members of the compensation committees that recommend these excessive pay packages are put under the microscope, with a focus on those serving on multiple committees of companies on the 100 most overpaid list.

Excessive and poorly structured CEO pay packages don’t just take money from shareholders and pose a risk for the destruction of shareholder value, they also prevent corporations from paying decent wages to their employees. Institutional and individual investors should be re-examining their assumptions and advocating for more reasonable CEO pay and to hold members of the board accountable.

To learn about the 100 most overpaid CEOs, the compensation committee members recommending the pay packages, and the mutual funds rubber-stamping excessive CEO pay, download the full report above. 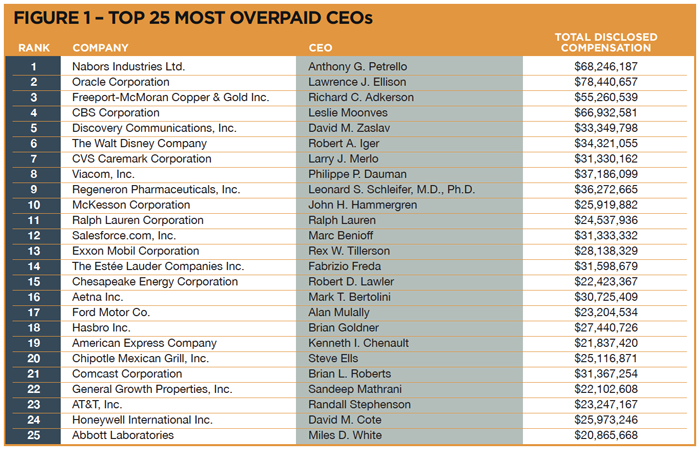 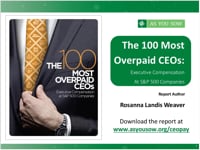 The pay packages analyzed in this report are the companies that the majority of retirement funds are invested in.

The data shows that there is virtually no correlation between CEO pay and shareholder returns.