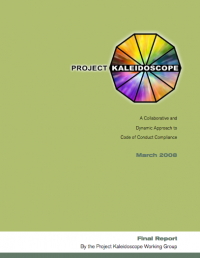 Project Kaleidoscope: A Collaborative and Dynamic Approach to Code of Conduct Compliance

McDonald’s Corp., Walt Disney Co., and a group of organizations working to improve working conditions in company supply chains, including As You Sow, announced the release of a report on Project Kaleidoscope, a multi-year collaborative project designed to promote sustained compliance with labor standards mandated by corporate codes of conduct for manufacturers.

The project was piloted at 10 contractor factories in southern China that produce goods for McDonald’s restaurants and Disney licensees. This collaborative effort developed and successfully field-tested an alternative approach to promoting and enhancing long-term, sustained code compliance.

For many years, McDonald’s and Disney have maintained strict codes of conduct for their licensees and manufacturers. These codes address a range of key labor rights issues including the prohibition of forced and child labor and the setting of requirements in such areas as health and safety, working hours, compensation, and compliance with applicable laws. In addition, both companies report that they have been active in undertaking educational, monitoring, and remediation efforts to promote compliance with these codes at the factories where their products are sourced throughout the world.

The project was launched as part of an ongoing effort to strengthen the effectiveness of these labor standards by drawing on the interest and expertise of interested investor organizations and jointly exploring means of promoting “sustained compliance” with labor codes. The project sought to foster the creation and testing of internal systems within factories in order to promote such compliance over time, including enhanced training and education for management, supervisors, and workers, and potential positive compliance incentives. The project also sought methods of encouraging remediation in facilities that demonstrate significant compliance issues, in order to minimize circumstances in which factory termination is the only business alternative.

In pursuing the project the group worked with local nongovernmental organizations as well as individual factories with the goal of developing practical implementation approaches, including training and remediation methods and tools. The project’s first Interim Report was published in January 2005.

The project grew out of mutual concerns discussed during the extended dialogue among the investor group and the two companies regarding ways to improve conditions in factories on a sustained basis.

In addition to As You Sow, The Walt Disney Company and McDonald’s Corp., the Project Kaleidoscope Working Group consisted of the Center for Reflection, Education and Action (CREA); the Connecticut State Treasurer’s Office (fiduciary for the Connecticut Retirement Plans and Trust Funds); Domini Social Investments LLC, the General Board of Pension and Health Benefits of the United Methodist Church; the Interfaith Center on Corporate Responsibility (ICCR); and the Missionary Oblates of Mary Immaculate.